If you use an Apple AirTag, after about a year or so, your iPhone will alert you that the battery needs to be replaced.  I own four AirTags that I purchased about 14 months ago, and two of them have alerted me that it is time to replace the battery.  I replaced the battery in one of them shortly before taking a trip to Italy, only to discover that I bought the wrong battery.  Learn from my mistake, and make sure that when you purchase a replacement CR2032 lithium 3V coin battery, do not purchase the version with a bitterant coating on it.

These batteries are small circles, and some children may be tempted to put them in their mouths and swallow them.  Which is not good.  A CR2032 battery with a bitterant coating tastes bitter when it reacts with saliva in a mouth, and the idea is that this encourages the child to immediately take the battery out of his or her mouth instead of swallowing it.  This type of battery should give you clear indications on the packaging that a bitterant coating is being used.  Here is the one that purchased from Amazon:

The idea of deterring improper use by children is a laudable goal, but apparently, the coating makes these batteries not work with certain electronic equipment.  Including the AirTag, as Apple warns on its website.

I didn’t think about this warning when I purchased this set of batteries, so I installed one of these in the AirTag attached to my suitcase shortly before my vacation.  I should have realized instantly that there was a problem because when you twist off the cover of an AirTag and replace the battery, before you even put the cover back on, the AirTag is supposed to make a sound to indicate that the new battery is connected.  I didn’t hear that sound when I replaced this battery. 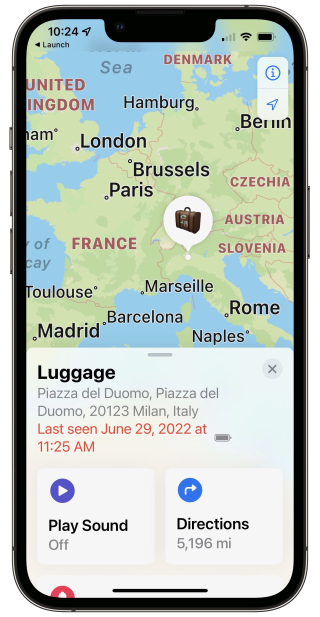 The solution, of course, was to purchase a new set of CR2032 batteries that do not contain a bitterannt coating.  When I installed the new battery, both in this AirTag and my other one that needed a new battery after my vacation ended, the AirTags immediately worked.  As soon as I installed the battery, I heard the sound.  And the AirTags correctly reported their location.

What annoys me about my mistake is that I should have known better.  Almost exactly a year ago, I linked to a report that CR2032 batteries with a bitterant coating might not work with the AirTag.  But a year later, I forgot about that.  Hopefully, after reading this, you won’t forget when it is time for you to purchase a new battery.