Apple’s annual WWDC conference is just a few weeks away, and on June 6, 2022, I expect Apple to preview iOS 16, which should be released this Fall.  But that doesn’t mean that Apple is done with iOS 15 yet, and yesterday, Apple released iOS 15.5.  This update comes two months after Apple released iOS 15.4.  iOS 15.5 is much smaller update with fewer new features.

Use Wallet to send/receive money

An update to the Wallet app makes it easier to send and request money using Apple Cash.

Just so that there is no confusion about what we are talking about, remember that Apple Cash is not the same thing as Apple Card or Apple Pay.  Apple Cash is a digital card stored on your iPhone in the Wallet app.  Once you connect a bank debit card to your Apple Cash card, you can easily add money to your Apple Cash account by transferring money from the debit card.  Apple Cash is an easy way to send or receive money with others, similar to what you can do with other apps like Venmo.  Apple Card is Apple’s credit card, and it uses the Mastercard network.  You earn up to 3% cash back on every purchase that you make, and that cash back is applied to your Apple Cash as you earn it (unless you haven’t yet set up Apple Cash on your iPhone, in which case it instead becomes a credit on your monthly statement).  Apple Pay is a way to make contactless payment with an iPhone or Apple Watch using lots of different payment methods such as a credit card (including, of course, an Apple Card), debit card, or Apple Cash.

Before yesterday, if you wanted to send or receive Apple Cash to someone else, you started in the Messages app and then you clicked the Apple Cash icon above the keyboard.  With iOS 15.5, you can now start in the Wallet app.  Select the Apple Cash card, and then right below the card you will see two big buttons to either Request or Send.  Select one of them, and then pick a person from your contacts.  Or, if you recently sent or received Apple Cash from someone, you will see them under Recents: 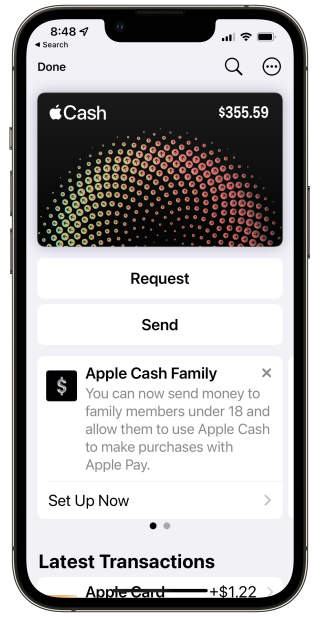 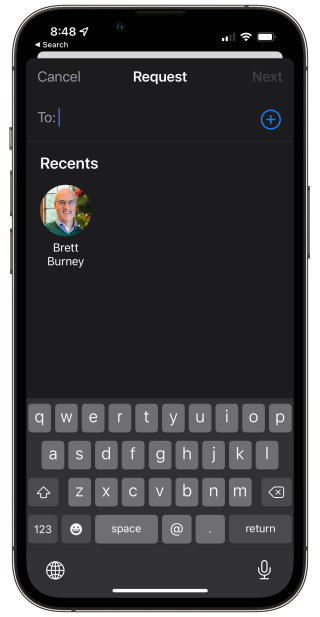 It looks like $10,000 is the most that you can request from someone.  Enter that amount or less, and then tap Request with Messages to send the request via the Messages app.  If you try to enter $10,000.01 or more, the app will not let you continue. 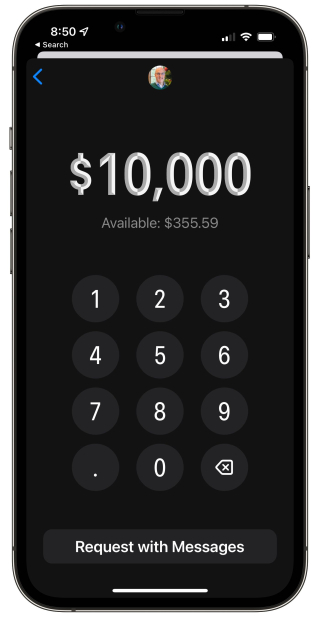 An even more minor change in the Wallet app is that when you are looking at information on your Apple Card, the app refers to the physical card as the Titanium Card, which makes sense since it is a rather thick and sturdy card made out of titanium.  Although I have the Titanium Card, I rarely ever use it.  Virtually every time that I pay for something with my Apple Card, I use Apple Pay on my iPhone or Apple Watch.

If you own a HomePod mini or the (now discontinued) HomePod, my guess is that you selected its location in your home based upon (1) having easy access to an outlet and (2) where you want the music to come from.  For home houses, another important consideration could be (3) a spot with adequate Wi-Fi reception.  Once you update your iPhone to iOS 15.5, it will eventually update your HomePod to version 15.5.  (If you want to do so manually, open the Home app, hold your finger down on a HomePod for about a second so that the menu pops up, and then scroll down and select Update.)

Here is how you check the Wi-Fi signal strength in iOS 15.5.  First, open the Home app.  Next, locate the HomePod.  You might have it listed under Favorite Accessories on the home screen.  Or, you might have to select a specific room and then find the HomePod listed there.  Hold down your finger on the icon for that HomePod for a second or so until a pop-up menu appears.  Scroll all the way down the menu to the very bottom.  One of the last options will be the Wi-Fi Address.  Tap on Wi-Fi Address and the words will change to Wi-Fi Network and you will see an icon with up to three bars to indicate the signal strength. 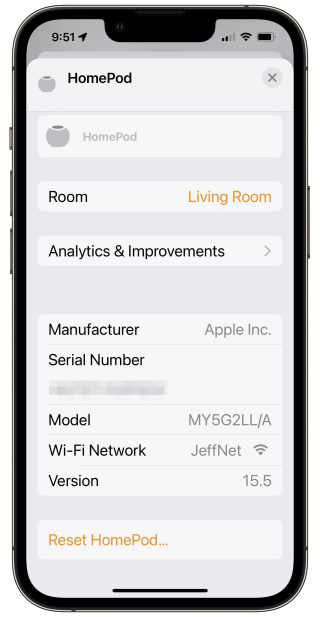 If you have two HomePods or HomePod Minis working as a stereo pair, there is an extra step.  In the Home app, hold down on the icon that represents the pair of speakers.  Then scroll down until you see the word Speakers.  Tap on Speakers to see the devices in the pair.  Hold down your finger for a second or so on one of the devices in the pair until the pop-up menu appears.  Then scroll all of the way down the menu to the very bottom, and tap on Wi-Fi Address to change it to Wi-Fi Network.

Sensitive locations in the Memories feature of the Photos app

The built-in Photos app automatically creates Memories with photos that you have taken in the past.  One might feature pictures of your son from 2014.  Another might feature pictures with dogs over the years.  Another might feature a place that you visited.  In iOS 15.5, however, Memories will not create a memory based upon certain sensitive locations where you took pictures, assuming that the pictures have location information in the metadata.  Filipe Espósito of 9to5Mac provides a list of some of these sensitive locations, such as the Anne Frank House, former concentration camps, and the U.S. Holocaust Museum.

Note that it is also possible to tell the Photos app that you would rather not see something in Memories, and this is a feature that existed even before iOS 15.5.  If you encounter such a Memory—such as a collection of pictures of a former spouse—tap the circle with three dots at the top right of the memory and then select “Feature Less…”  Next, you will see some options based upon the type of Memory, such as select this day less, select this place less, or feature a person less.

Safety for minors in Australia, Canada, New Zealand, and the UK

Last year, I described efforts that Apple was taking to protect children who use an iPhone.  One of those steps was to display a warning when a Messages detects that a child is about to send or receive a photo that contains nudity.  Apple provides lots of details on how this works on this page of its website.  iOS 15.5 brings this feature to iPhone users in Australia, Canada, New Zealand, and the UK.

None of the features I described above are major new features, but they are nice improvements.  There are also lots of even more minor changes in iOS 15.5 and the related iPad OS 15.5 for the iPad.  For example, the Universal Control feature on the iPad is no longer labeled a beta feature, so hopefully that will mean that it works even better … although, for me, it has been working quite well even in the beta version.  And if you were having trouble with certain home automations that were supposed to be triggered when someone left or arrived at a location, that might have been because of a bug that Apple says that it has now fixed.

Also, like any iOS update, iOS 15.5 includes lots of security updates.  Thus, even if you don’t care about any of these new features, it is a good idea to install the update to keep your device safe.