Apple introduced the first iMac in 1998, and the first model that I purchased was the iMac DV in 1999.  The “DV” indicated that this computer was designed to work with digital video, and along with the iMac DV, Apple introduced its iMovie software so that folks like me who were not video professionals could create home movies that looked like they were made by a professional.  In 2010, the same year that the first iPad was sold, Apple released a version of iMovie for iOS.  For the past 12 years, I’ve done most of my video creation on a Mac, not an iPhone or iPad, and a number of years ago I moved up from iMovie to Apple’s Final Cut Pro software to give me more flexibility.  But I’ve always enjoyed having the ability to use iMovie on an iPad or even my iPhone whenever I wanted to spend a short-to-medium amount of time creating a nice video.  For example, I remember taking an overnight train ride with my kids many years ago when they were younger (and cuter).  After taking some fun videos of the kids during the day, I used my iPhone one night, in the tight bed of an Amtrak train’s sleeper car, to put the best clips into a movie to share with the grandparents.  I had fun making the video in iMovie, and the grandparents got to wake up to a fun video.  Since the train we were taking from New Orleans to Chicago is called the City of New Orleans, you can probably guess what song I used in that movie.

Yesterday, Apple updated iMovie for the iPad and iPhone to version 3.0.  You can still use iMovie to create your own videos from scratch, but Apple added two new ways to create movies: Magic Movie and Storyboard. 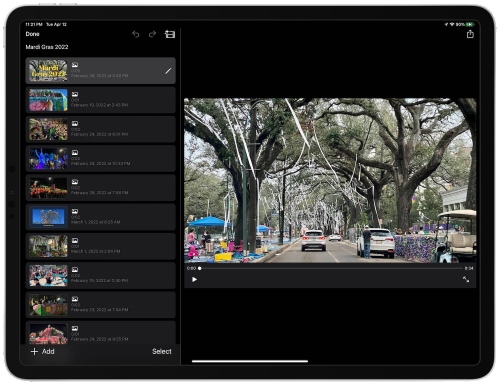 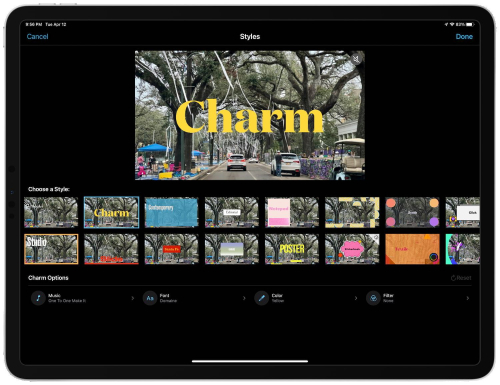 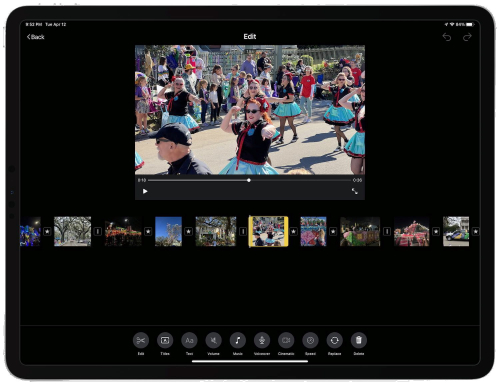 The Magic Movie feature is clearly based on the Memories feature of the Photos app.  At their core, these are two very different features.  Magic Movie in iMovie is for when you want to select the media to start with and have more control over the final movie that is created.  Memories works automatically in the background, surprising you by picking a movie topic that may not have ever occurred to you, such as a movie based on a trip you took to the wine country 12 years ago or a movie that combines all of the pictures and videos of waterfalls that you have taken over the last 20 years.

However, there is a version of Memories that has a lot in common with Magic Movie: a memory based on a specific album.  In the Photos app on an iPad or iPhone, you can select an album of Photos, tap on the three dots at the top right, and then select Play Memory Video.  Photos will then use the Memories technology to create and play a movie with all of the pictures/videos in the album.  In some ways, Photos can create a better video: (1) it will automatically use all of the photos/videos in the album, although you can manually deselect some of them; (2) if you took the picture with an iPhone and have the Live Photos feature turned on, you will sometimes see a very short video clip instead of the photo, which is often much more fun; (3) you can pause the movie and even swipe back to see previous photos and the soundtrack will keep playing.  But in other ways, the movie that you create using the Magic Movie feature of iMovie is more powerful: (1) you can rearrange photos and videos to control the order in which they appear in the movie; (2) you can add photos/videos from your entire Photos library without being limited to the contents of a specific album; (3) you can add titles to pictures; and (4) you can adjust the speed of a video clip to make it faster or slower.

Overall iMovie is more powerful than Photos when it comes to creating and editing a movie.  And my guess it that some of the differences I noted above will come to iMovie in a future update.  For example, it seems obvious to add to iMovie the ability to use either the still photo or the Live Photos video, and I’d be shocked if that wasn’t added in a future update since that already works when you create a movie using Memories.  There are also some features that have long been in iMovie but are not currently in the Magic Movie part of the app.  For example, if you create a movie from scratch in iMovie, you can control what transitions are used between photos or videos, such as a fade, a wipe, etc.  When you edit a movie created using Magic Movie, you will sometimes see different types of transitions between photos or videos but you cannot change them.  Again, I suspect that this will come in a future update.

If I want to take my time editing a movie, Final Cut Pro on my iMac is always going to offer more options and power.  (And I hope that one day we see Final Cut Pro on the iPad.)  But for putting something together more quickly while still maintaining some control over the final product, I’m impressed by the new Magic Movie feature of iMovie.

Most of the home movies that I create are strictly chronological.  I start with the video that I took first, and I end with the video that I took last.  The primary editing that I do is to cut out all of the boring stuff in the middle.  A professional movie takes a more sophisticated approach.  It may start with a wide view of a location, then cut to a close-in view, then switch to a different camera angle, etc.  I’m a lawyer, not Steven Spielberg, so I have virtually no experience making those sorts of movies.  But with the new Storyboard feature in iMovie 3, I might be able to fake it pretty convincingly.

When you select the Storyboard feature, you are asked to select the type of movie that you are creating.  Is this a cooking video?  A top five video?  A makeover video?  A trip video?  A book report?  For now, there are 21 types of storyboards to choose from, and I presume that even more will come later. 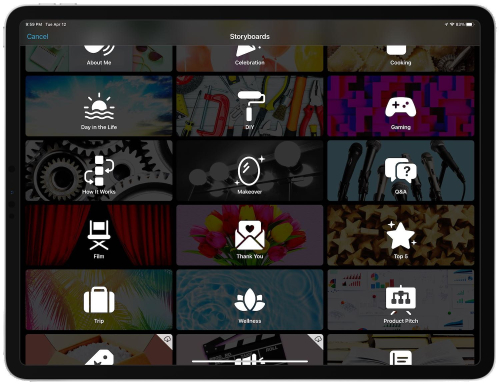 After you select a storyboard, iMovie will tell you what type of clips that you need for the movie.  For example, let’s say you are creating a Celebration a movie with clips from someone’s birthday party.  Tap Celebration and then look on the left for the types of videos that you will need. 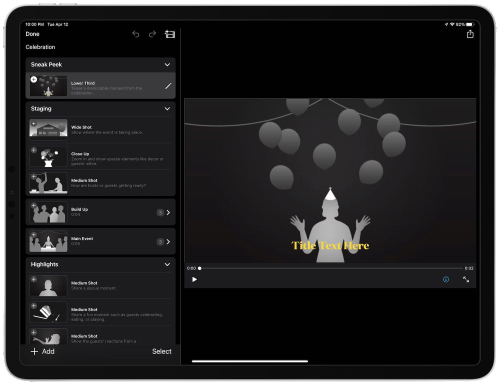 iMovie suggests that you start with a sneak peak video — a memorable moment from the celebration (perhaps the person blowing out candles).  Then move on to the Staging part of the video, first with a wide shot of where the event is taking place, then with a close up on something special, then with a medium shot such as people getting ready.  Next, you have the Build Up, again with three different types of shots.  Then you have the Main Event with another three shots.  Then the Highlights, where iMovie suggests three medium shots followed by a close up.  Then in the Wrap up, iMovie suggests a wide shot, followed by a medium shot, followed by a lower third shot where you might, for example, thank your guests for coming.

Each storyboard type has different storyboard elements that are specific to that type of video.  You don’t have to follow each of the recommended steps, and you can always rearrange and add video clips later.  But if you use a storyboard as a template—looking at it before you even start taking videos so that you know what types of shots you will want and then applying video clip to those template elements afterwards—you will end up with a movie that is likely to be much more interesting than a simple chronological list of videos in the order that they occurred.

The Storyboard feature looks like a nice guide for creating much more entertaining videos.  I look forward to trying it out.

It has been a long time since Apple added major new features to iMovie.  Indeed, this is version 3, and version 2 came out eight years ago.  But these two features look like great additions.  Magic Movie looks great for when you want to quickly create a movie.  Storyboard looks great for when you want to take your time, plan your shots, and then assemble something that is likely to hold the interest of your audience.  The iPhone has long been capable of taking high-quality photos and videos.  Now, we have new ways to put it all together into a movie using Apple’s free iMovie app.