This has been a busy month on iPhone J.D. with all of the new Apple product announcements, and this month’s coverage has been brought to you by LIT SOFTWARE.  If you are an attorney and you own an iPad, LIT SOFTWARE should be a name that you know well.  Ever since 2010, when Apple first came out with the iPad, LIT SOFTWARE has been coming out with the best apps designed for lawyers: TrialPad, TranscriptPad, DocReviewPad, and ExhibitsPad.  These apps have made a huge difference in my own law practice, and I have long lost count of the number of attorneys who have shared stories with me about the great things that they have done with these apps over the years.  TranscriptPad is an essential app for reviewing and annotating deposition transcripts, and this app makes it so much easier for me to prepare pre-trial motions and prepare for trial.  When you are in trial, TrialPad is the best way to present evidence from your own iPad so that you can show things to the jury at the same time that you are telling the jurors about the evidence.  TrialPad also works well in mediations, presentations, and any other time that you want to present and annotate documents to an audience.  DocReviewPad is great for reviewing documents on an iPad for a document production.  With ExhibitsPad, the company’s newest app, each juror can hold an iPad in their hands and view the evidence.  I have written about these apps, and provided tips and tricks for doing so, many times over the last dozen years, including: 1/13/11, 1/18/12, 7/25/13, 7/16/14, 11/18/14, 1/6/15, 6/11/15, 7/7/15, 9/1/15, 10/27/15, 5/19/16, 8/31/16, 9/19/16, 11/28/16, 3/9/17, 9/5/17, 4/5/18, 2/24/21, 5/11/21, 10/13/21, and 7/12/22.

Last year, I announced that the LIT SUITE apps are coming to the Mac.  A beta version has been available for a few months, so I and many others have been kicking the tires to see how these apps run on a Mac.  And I’m happy to report that the apps should be coming out of beta for the Mac very soon.  (I’ll post on iPhone J.D. as soon as it happens.)  You get the Mac apps included as a part of every LIT SUITE subscription, so it won’t cost you extra to take advantage of these apps.  Just download the apps on your Mac and get to work.

Considering that the LIT SUITE apps were originally developed for an iPad with a touchscreen, when I first heard about the Mac apps last year, I wondered how the apps would translate to a traditional computer environment.  Now that I have used the beta versions, it is obvious that this is a great development.  Yes, for some functions, these apps work best on the iPad.  But for other functions, it is better to use the apps on a Mac.  Having the ability to use the best tool to get the job done is the best of both worlds.

Let me give you an example.  Because the largest part of my practice is being an appellate lawyer, and because that role frequently involves me working with trial counsel on critical pre-trial motions that can win (or lose) the case, preparing pre-trial motions is a large part of my law practice.  When I read a deposition transcript for the first time, I prefer to do so on the large screen of my iPad Pro using my stylus.  I can get comfortable in a chair, analyze the testimony, and assign issue codes to each bit of testimony that is important.  Later, when I am ready to prepare a motion on a specific issue, I tap the report button to see all testimony from all witnesses on that specific issue.

When I’m reviewing a deposition for a second time to prepare the motion, I am often in front of a computer.  It is great to be able to run the TranscriptPad app on the large screen of my iMac and have easy access to all of the annotated deposition testimony in the case.  When I open a case file using TranscriptPad on the Mac, I can see folders for each witness in the case. 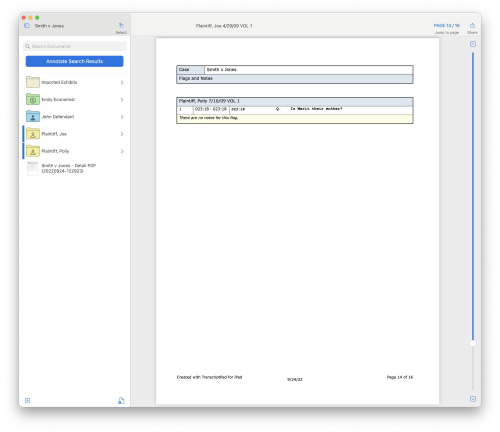 I can click on a witness to take another look at any deposition.  Sometimes, on a second review, I will see additional testimony that I can use in a motion, so I can perform additional annotations or edit prior annotations. And of course, any changes that I make on the Mac are available when I go back to my iPad. 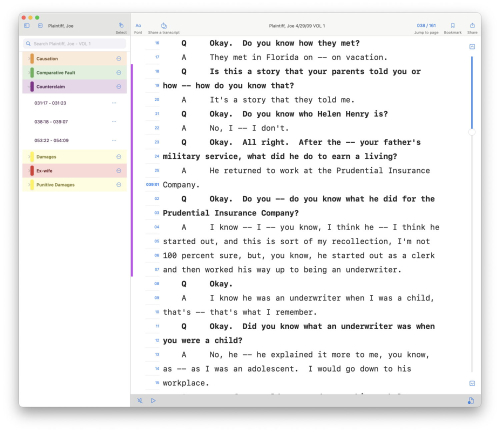 To make a case file available on both the iPad and Mac, so that both devices can see and edit files, you need to store the case file in iCloud.  The LIT SOFTWARE website has a help page that explains all of this, not that there is really anything complicated about storing a file on iCloud.

One of the best features of TranscriptPad has always been the reporting feature.  After you have reviewed the transcripts and identified which testimony is important for which issues, you can create a report in PDF format containing all of the key testimony on that issue from all of the witnesses.  With TranscriptPad on the iPad, you can review that testimony on the large screen of your Mac.

One thing currently limited in the Mac version of TranscriptPad is the ability to copy a designation so that you can paste it elsewhere, such as in a Microsoft Word document.  Currently, you can share selected testimony to an email or a Note, and then once it is there, you can copy it and paste it into Word.  That works, and I’ve done it many times.  It would be better if you could share from TranscriptPad directly to Microsoft Word.  Ian O’Flaherty (Founder the CEO of Lit Software) told me that the current Mac share sheet provided by Apple is more limited than what is available on the iPad, so they are looking for additional solutions to work around Apple’s limitations for iPad apps that are brought over to the Mac.  I have no doubt that all of the LIT SUITE apps will gain more features in the future as Apple provides better tools to developers who are moving apps from the iPad to the Mac.

As much as I love TranscriptPad, I suspect that TrialPad is the most famous of the LIT SUITE apps.  With TrialPad on a Mac, you now have another tool that you can use to connect to a screen or projector to share evidence.  Although I haven’t yet used it myself, Ian O’Flaherty told me about an attorney who used the beta version of TrialPad on a Mac in a two-week copyright trial to play videos for a jury, and it worked well.  Any attorney who uses beta software in a jury trial is more brave than I am, but I guess the brave attorneys are the ones who get to tell the better stories afterwards. 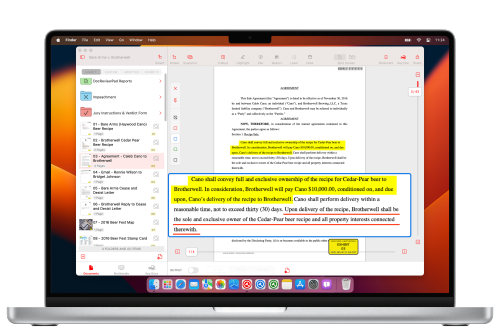 One of my favorite things about the LIT SUITE apps is that while each app was immediately useful on the day it debuted, the apps have been updated countless times over the past 12 years to add new features.  Being able to use the apps on a Mac is just the latest new feature, although it is an important one, yet another tool in your litigation toolbox.  Those of us who have been using these apps for over a decade have been delighted over the years by all of the improvements.  If you are new to the LIT SUITE apps, you are lucky to be able to take advantage of all of these new features today … but I have no doubt that even more improvements are in the pipeline.

If you are an attorney and you have not yet started using the LIT SUITE apps, this is a perfect time to do so.  And if you also use a Mac, with the final versions of the Mac apps just around the corner, you are about to be able to use these great apps on even more devices.